Here’s a slice of the movie “Wander” in which Rita took part last year while she was staying in San Francisco, directed by Claude Cardenas. It’s a no budget silent sci-fi film and he’s adding his own special effects besides editing and sound and everything else with his super powers. Claude hopes it will be done by the end of this year. Rita will also add some original music. We will be looking for places to screen it. Go Claude!!! Also check his tumblr http://allthegirlsieverloved.tumblr.com/

In the director’s own words: “I wrote a couple new scenes for this and hopefully it will be done by the end of the year. It’s probably the weirdest thing I’ll ever make and I’m hoping I die right after I finish it.”

during her recent 3 months tour in the US, Rita Braga acted in a weird short silent film directed by Claude Cardenas called “wander”, shot in San Francisco. The movie has only 2 characters, one being Rita and the other is Steffey Sue, a very cool ukulele player from Berkeley! Rita is currently writing the original score for “wander” in Lisbon. The song “A Lira” from the new abum “Cherries…” will also be part of the soundtrack.

You can discover more of Claude’s photography here. 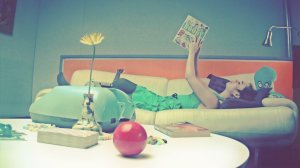 RITA BRAGA is a singer, songwriter and multi-instrumentalist from Lisbon, based in Porto. She performs songs in 15 languages, both solo and collaboratively. Over the last decade she has performed all across Europe, the US, Brazil, Australia and Japan. She has released 2 studio albums, 2 EPs and has written and performed a sci-fi minimal ukulele pop operetta. From time to time, she receives insight from cartoon personalities in her dreams (such as Bugs Bunny) on how to conduct her career.