Weekend in Porto at Gato Vadio

Gato Vadio is a very nice bookstore in Porto which hosts different events such as small concerts and theatre plays, workshops, poetry readings and has a special taste for silent movies, philosophy and anarchy. Plus they have some nice drinks and sweets, a nice red wall with a spiral that reminds me of Vertigo and a neat garden.

I am playing tonight with Presidente Drógado, who I favor as one of the best singer songwriters in the Portuguese underground music scene. He can provoke the audience who responds to the insults and the lyrics can be very didactic, such as in the big hit “Drogas de A a Z” (Drugs from A to Z). We started playing together in 2007 when I was Nossa Senhora (the Virgin Mary) but later I became Marciana Verde (the Green Martian). 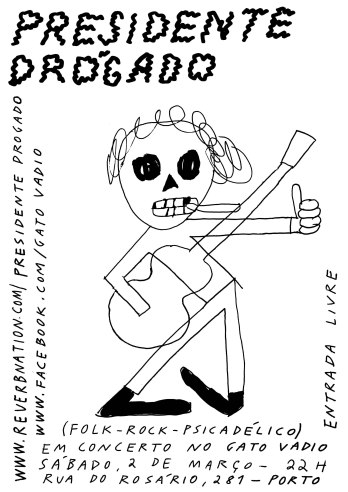 Tomorrow I am hosting for the second time a Cabaret. The first one was open to all kinds of magical duets, now it’s time for the CABARÉ TROPICAL (the Tropical Cabaret)! Porto in the wintertime at night doesn’t really feel like tropical weather but we can use our imagination and fly to Brasil! Not Brazil in South America, but the mythical island of Brasil.